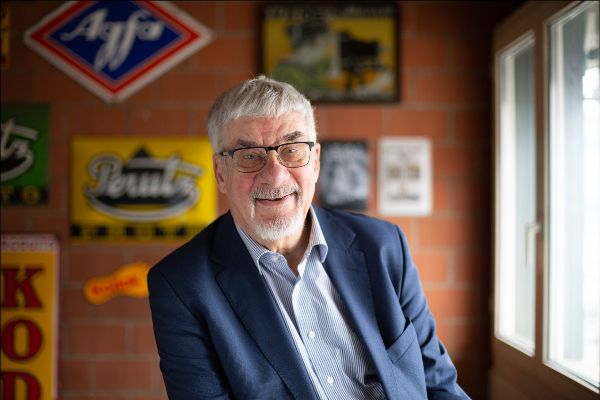 Urs Tillmanns. After more than 27 years, "Fotointern", the Swiss website for daily photo news and a photo agenda will no longer be under the direction of its founder Urs Tillmanns (76), but will now be headed by his long-time freelancer Markus Zitt.

Tillmanns' career began when he completed his photography apprenticeship in 1968 with Hans Hinz in Basel, one of the first commercial colour photographers in Switzerland. He then worked for 14 years as an advertising, science and industrial photographer, for example at the forensics department of the public prosecutor's office in Basel-Stadt, at the watch company Longines in St.Imier and at Alusuisse, Research + Development in Neuhausen.

From 1976 to 1991, Tillmanns was the Swiss editor-in-chief of the international magazine PHOTOGRAPHIE. During that time he wrote over 1,200 articles and essays on theoretical and practical areas of photography and published 13 books on photo-didactic, technical and photo-historical topics.

From 1991 onwards, Tillmanns worked as a freelance specialist journalist and editor and ran the press office of the Interessengemeinschaft der Schweizer Foto-Lieferanten (ISFL). He was president of the Society of the Swiss Camera Museum in Vevey and served as founder and editor of "Fotointern" and the accompanying "Fotoagenda" until 31 December 2021. Fotointern was first published fortnightly as a printed magazine for professionals and the photo trade and has been online for 13 years as a daily updated website.

Why did you found Fotointern? It was founded in 1994 when I was editor-in-chief of the Swiss edition of the magazine "PHOTOGRAPHIE", which was then sold to a publishing house in Germany. The aim of Fotointern was to create a new, regularly published Swiss trade magazine for professional photographers and the photographic trade, which did not yet exist in this cadence and type. The main aim was to present interesting new products, but also to address industry topics that had a Swiss connection. The magazine was to form a contrast to the large, predominantly German photo magazines, all of which were published monthly and addressed mainly amateur photographers with detailed, technical articles and portfolios.

How was Fotointern able to establish and maintain itself in the Swiss photo scene in the long term? The popularity of PHOTOGRAPHIE, which had been very successful in Switzerland since 1977 and was also strongly supported by the photo industry, helped. The idea of launching a biweekly magazine, mainly with industry topics, was also very welcomed by the suppliers. With a low subscription price and free delivery to apprentices, Fotointern quickly found a large and loyal readership. Things only became problematic in 2008, when the economic crisis unsettled the advertising business.

Above all, big players like Kodak, Agfa and others withdrew from the usual annual scheduling, and it quickly became apparent that profitability could no longer be secured for 2009. So Fotointern was like many other magazines: the switch from the print edition to a daily updated internet platform was the logical consequence.

What is the purpose of Fotointern? The publication goal of Fotointern has remained the same since it began 27 years ago: Fotointern is to provide up-to-date information on new products and cultural topics, and to do so as far as possible in relation to Switzerland. This makes Fotointern unmistakable in comparison with similar foreign photo news platforms. The photo agenda with the dates of the most important Swiss exhibitions contributes to this. Photo courses, trips or book reviews, mostly of new publications from Swiss publishers, as well as top stories are also listed in the agenda. The focus articles deal with the work of Swiss photographers or topics with a connection to Switzerland.

What has changed in the photography industry during this time? In the 27 years - I include the time of the print edition because it covers an interesting era - Fotointern has become an almost complete reference work on the most important innovations, exciting developments and industry topics. This includes, above all, the transition from film to the digital image. At present, the ETH Library is digitising and indexing the approximately 8,000 pages of the print editions from 1994 to 2009 - a huge task that should be completed in the course of the year that has just begun. This will create a digital reference work that covers the development of photography in Switzerland with the transition from analogue to digital photography.

Why do you stop? It's mainly age-related - you should take care of things while you're still able to. I now have 11 years of "AHV overtime", and I want to devote myself to other things than producing news every day. Every year, about 1000 articles have appeared on Fotointern. That's about two and a half a day - including Saturday and Sunday. That is a work pressure that becomes too much for me at some point. Fortunately, my employee Markus Zitt is taking over Fotointern, otherwise I would have pulled the plug on 31 December 2021.

What will happen to the business? Markus Zitt and I have worked together for twelve years. Zitt is a proven specialist journalist for photography, consumer electronics and IT and knows Fotointern very well, from the content concept to the technology behind the website. This guarantees that everything will continue as usual. At least for the time being, because a communication medium always bears the signature of its creators and the tendencies of the times. Sooner or later, this will certainly also be noticeable in Fotointern. In addition, I will still be working for Fotointern, but no longer on a daily basis, but occasionally - and with the topics that I particularly like and enjoy.

You can find more information at Fotointern.ch