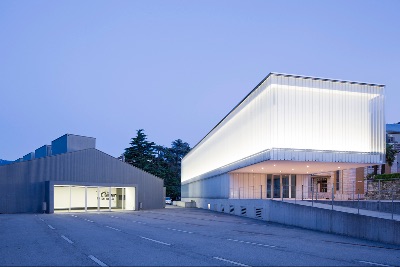 What made you change your profession and become a photographer? After working as an architect in a studio for two years, I needed a reflective break and took a three-month trip to Argentina and Chile. There I met two photographers who worked for National Geographic. They took me on a four-day photo expedition at 5000 metres above sea level. It was beautiful. It was what I had been looking for. Who told me to come back to Switzerland as an architect, to sit in an office chair all day and design houses I didn't want to live in?

Did you take photographs before or did you jump in at the deep end? I've always liked photography, but whether I do it as an amateur or do it as a professional to make money doing it, that's something else. But I took the plunge because I knew I had to do it and I really wanted to do it.

Wasn't it a risk? It was risky, but I like risks and it motivated me to do my best.

How did you train to become a photographer? I was lucky enough to be able to assist a good photographer for three years. There I learned my profession to a large extent. At the same time I worked 50% as a temporary photographer for a local newspaper, so I was able to build up a professional network and find clients. Colleagues also gave me my first assignments as an architectural photographer.

Continuing education is important to me every day, whether in workshops with the SBF Sezione Svizzera italiana or with other photographers. Every day I look at pictures and try to understand what the photographer wanted to achieve and how it was done.

Who are your clients? Today I work almost exclusively in the field of architecture. I document large construction sites for the federal government, work with the canton to document cultural assets (listed buildings such as churches, monuments and houses) and take photographs for architects, engineers and real estate agencies.

Is there a defining event? An architect once thanked me for the photos because they reconciled him with the building he had designed and followed for two years. It was a complex project full of compromises for him, and the client was also very demanding. When the construction work was finished, he was exhausted and annoyed. The photos were like a "psychological cure" for him. They made him reconcile himself with the building. So photos are not only documentation, they can also be good for the soul.

As an architect, do you have an advantage over non-architect photographers? As a trained architect, I have an eye for recognising the intentions of architects. We speak the same language.

How do you see your role as delegate of the SBF Svizzera italiana? The Sezione Svizzera italiana was in crisis until a few years ago. Thanks to the help of the Central Federation (PK) and SBF member Sabrina Stäubli, all the material on the website was translated into Italian. This motivated us to start again as a section and everyone contributed.

I was the only one in the section who spoke enough German, so I made myself available as a mediator between the section and the PK. But it is not always easy to express yourself in another language (google translator does not work in conversations). It is important for the Section to know that there is someone in the PF who can advance the interests of a small Section.