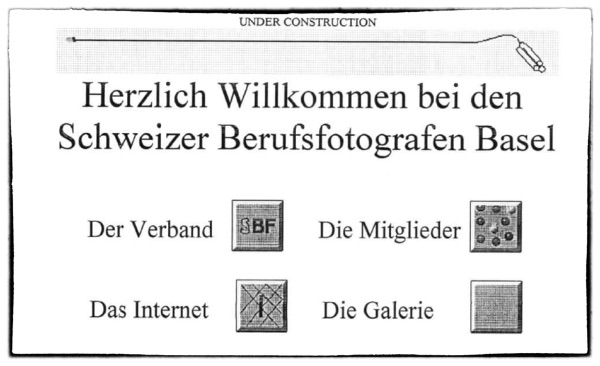 Archive work II - the SBF in the changing digital age. As reported in the May SBF INFO, the Section is currently working its way through the SBF archive. Today Robert Hausmann, who is conducting the sifting and digitisation of the documents, takes a look back to the time when the SBF discovered the internet:

While sifting through the material, the scanner directed remarkable documents to my desktop. They still show the last phase before digitisation: in the early 90s, SBF members sent their minutes by fax rather than by post. However, during my "scanning action" it became apparent that these faxed documents could not be placed in the automatic paper feeder. Unfortunately, because of the thermal paper used at the time, they are now almost illegible.

The next stage of modern association communication began with the realisation of a photo CD as an advertising medium for the SBF. As can be read in the cost estimate of 1993, the advertising medium photo CD was to offer members an interesting profiling opportunity as a forward-looking image storage medium.

The decade held another surprise in store for photographers in terms of digitalisation/marketing - the internet. Above all, SBF member Werner Indlekofer ensured that the SBF did not miss the boat on the possibilities of digitalisation by setting up a website. As the scan of the draft of the first SBF website from 1996 shows, programming was still in its infancy at the time. And today? In 2021, the association celebrates the 25th anniversary of its modern website!
By the way, the domain sbf.ch was registered on 13 May 1998.

There is still a lot to discover in the SBF archive! We are also discussing whether the content should be open to all SBF members at a later date.